I had to post this because it’s my first attempt at using a sewing machine, and it didn’t turn into the complete fiasco I imagined it would be (thread and buttons flying everywhere). That said, if I can do it, anyone can!

The subject of this project is a Banana Republic red short trench coat from Spring 08 that had these ugly red metal buttons and cheapish red plastic belt buckle. I’ve worn it a bunch of times, but always meant to do something about those ugly buttons. In hind sight, I should have taken a before photo, so I found a photo from an eBay auction instead: 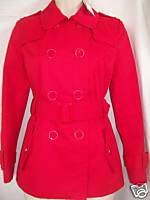 I decided to go for a traditional tortoiseshell pattern button and black leather bound belt buckle, which I found at a fabric store.

Not bad for a first timer, hmm?