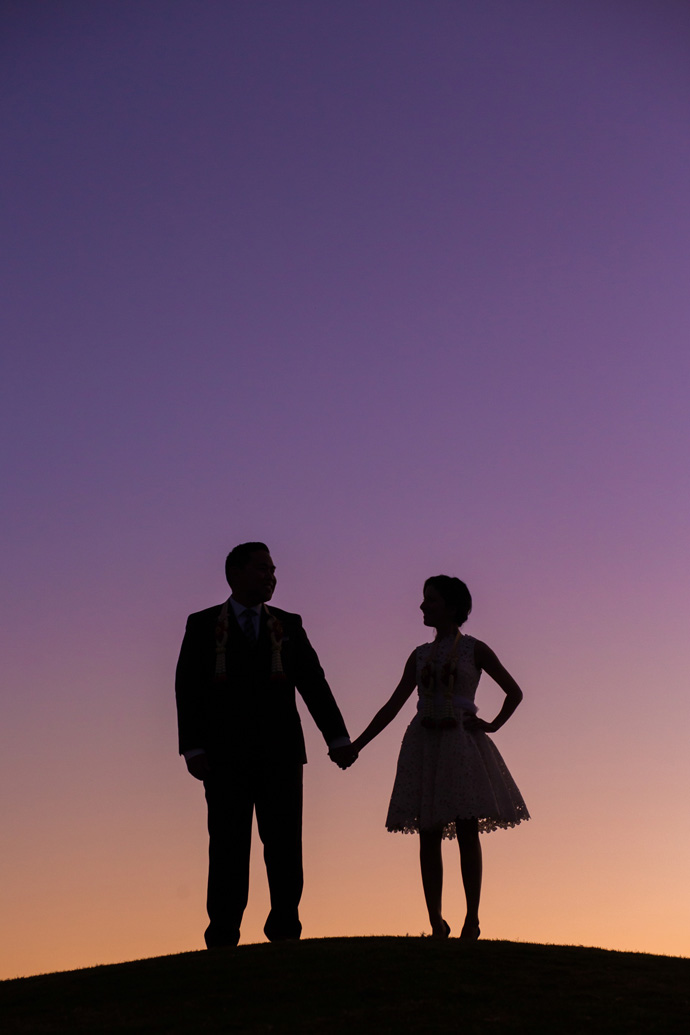 Hi everyone! As wedding season kicks off, I hope you’ll enjoy this long overdue look at our wedding from last November, including a little bit about shopping for and tailoring the dress! =)

First, a little backstory on us. We had been dating a pretty long time by most people’s standards. We got engaged on our 8 year dating anniversary, so we heard a pretty big sigh of “FINALLY!” sweep across from family and friends who had been nosily prodding us on the subject for several years by that point.

We got married within a month of our 9 year dating anniversary, so this fall will mark 10 years of being together, and 1 year of wedded bliss. =)

When we moved to San Diego from LA, our first indoctrination into the San Diego craft beer scene was at Stone Brewery in Escondido. I remember first stepping out to the beer garden, sipping on a tasty craft brew, surrounded by happy people (I’m convinced it’s pretty much impossible to feel anything but pure unadulterated joy at Stone Brewery) and thinking, “This is adult Disneyland! If I ever get married, I’d want it to be here!”

Fast forward to wedding venue scouting time, and Stone was first on our list. It turns out Stone in Escondido had some limitations (party size, music restrictions) that were deal breakers for us…but a new, bigger Stone Brewery location had just opened in Point Loma so we focused our attention there.

The day we arrived to tour with the event coordinator, a wedding reception was being held in the exact space we were interested in. We peeked in on the festivities and it was just what we wanted. Laid-back party atmosphere. Delicious food. Delicious beer with two(!) dedicated bars. A kick-ass band playing their hearts out (we liked them so much, we got their card & ended up convincing them to play our wedding too…). We basically said, “We’ll have what they’re having”, booked the space & picked the date right there on the spot. Our impending nuptials were quickly dubbed “Wedding of the Century” by beer thirsty friends and family once the location details started circulating. =)

The inside space we booked at Stone Brewery, Liberty Station // the chandeliers are beer bottles!

If you’re thinking about a San Diego wedding…Stone is actually a great deal. There is no space rental fee…just minimums that you have to meet, which we easily met and surpassed. It kept our party rentals down to a minimum because most things were included free of charge, such as all tables, chairs, dining plates and silverware, even the servers and tray passers were Stone employees set aside just for our party. Food and drink prices were also not the normal price-gouged wedding prices, which was spectacular. I’d definitely recommend!

As a girl who’s not particularly interested in dresses, this part had me stumped for a long time. We were getting married (ceremony & reception) at a beer brewery, so there was no need for anything crazy dramatic or elegant…plus, that’s just not my style. So, I did what most girls do, I started a Pinterest board. It came down to two options…both pretty untraditional. I either wanted to go short fit and flare, or I couldn’t shake my obsession with the dramatic shirt dress. I kept flip flopping between these two options: 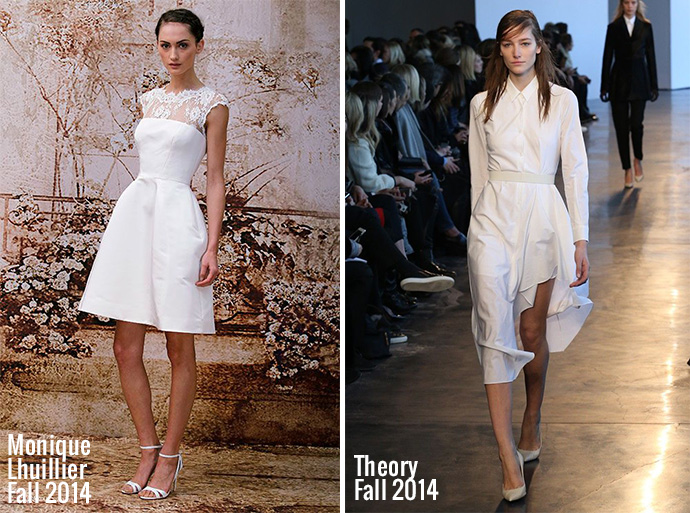 Fun fact: I ended up finding the navy version of the Theory dress on sale!

Ultimately, I decided I’d probably feel more comfortable in something a little more “bride” than the shirtdress, so I booked an appointment with Monique Lhuillier in Los Angeles, since they consistently produce a line of cute, short reception dresses. It was the only bridal dress appointment I booked, and after trying on 3 dresses, I chose the very first dress I tried on that day. The boutique took my measurements, placed the order, and my mom and I toasted with a celebratory glass of wine at the restaurant next door. =) 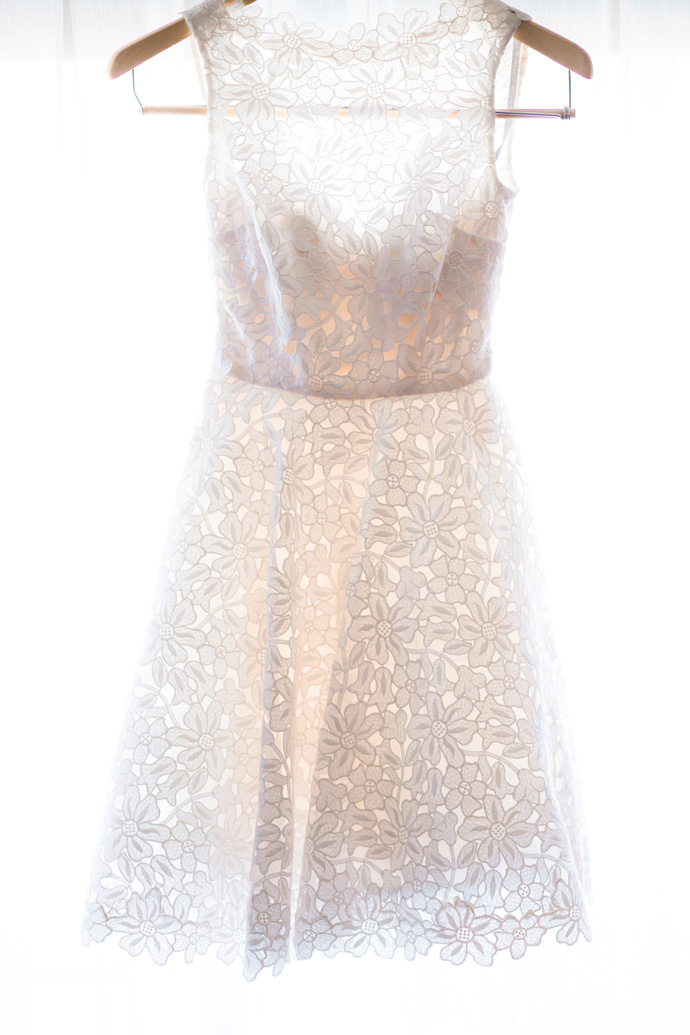 I knew exactly what shoes I would wear…my blue suede Manolo Blahnik BB’s. 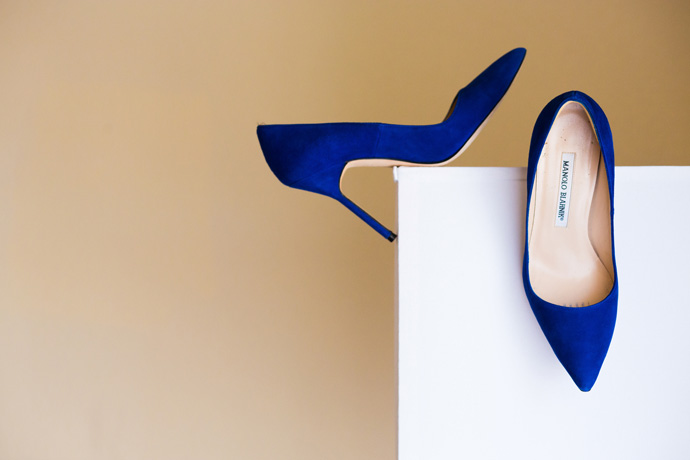 Since I’m used to complete overhaul tailoring experiences, I didn’t find this part too concerning. I was given the option of using the Monique Lhuillier tailoring services (for a fee of course), or picking up the dress and using a tailor of my choosing. I had no doubt my LA tailor could handle the job, but decided to use the ML tailor, because I knew it would be a lot of complicated work, and I wanted to have the peace of mind knowing that if anything went wrong in the tailoring process, I’d have leverage with the boutique for a rushed fix of the problem (not a guarantee, but at least I’d have ground to stand on).

I went through 4 rounds of fittings. The first was to fit the bodice that lined the inside of the dress. The second was to bring the dress up at the shoulder to better align the waistline and bust to my own since I’m so petite. The third was to slim and adjust the bodice for a snugger fit. The last was to adjust the neckline, since I wanted it cut lower than the original design. I was able to pick up my finished dress 1 week before the wedding. Phew! Just in time.

*note: for privacy sake, I’m only including a selection of photos that don’t include party guests. 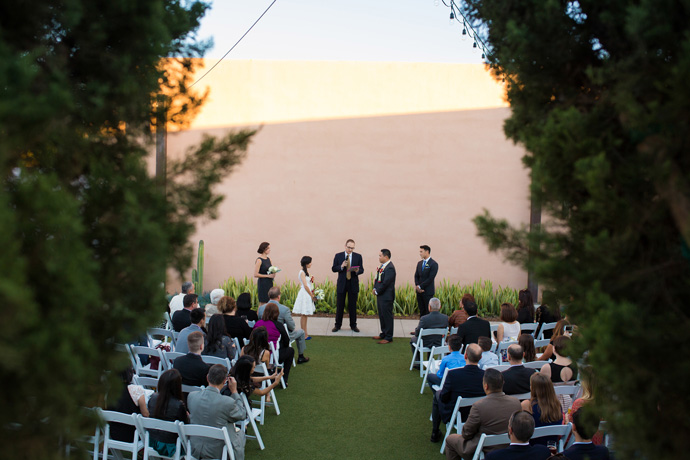 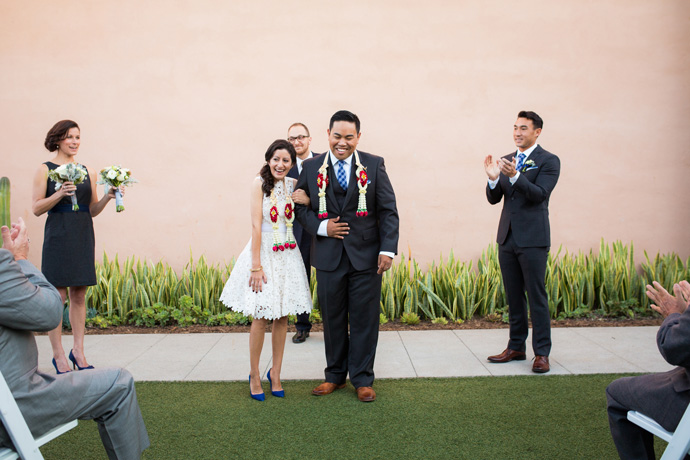 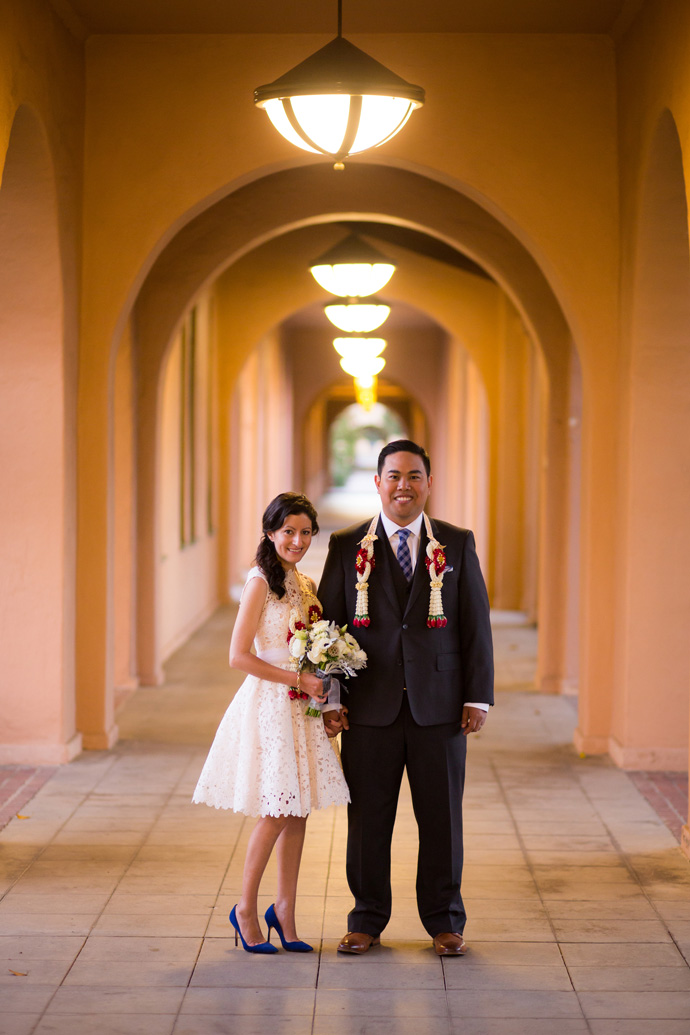 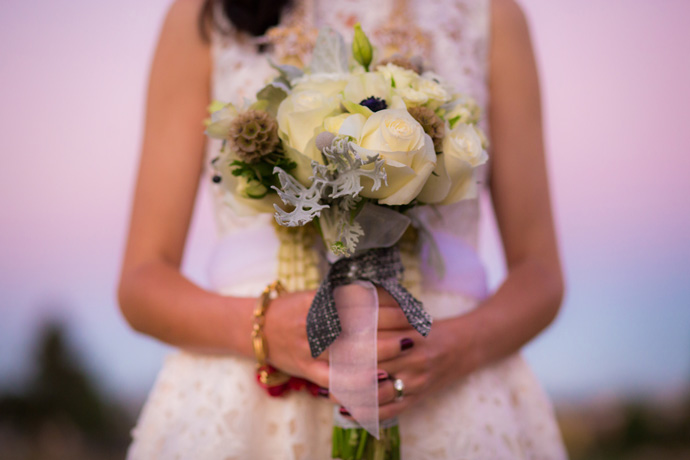 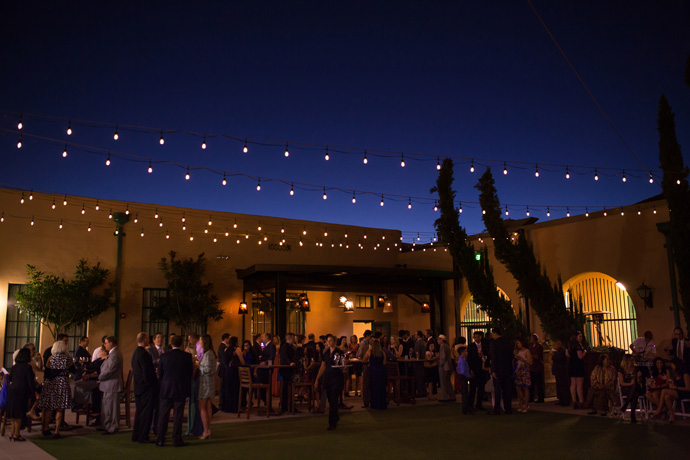 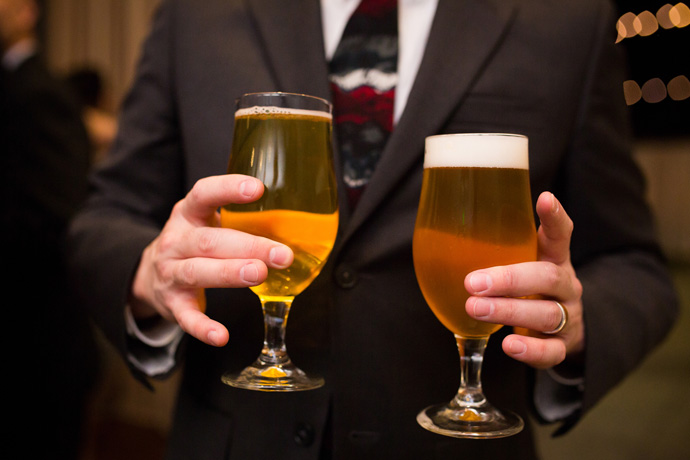 Mmm…beer…*drool drool drool* // The real reason everyone showed up ;) 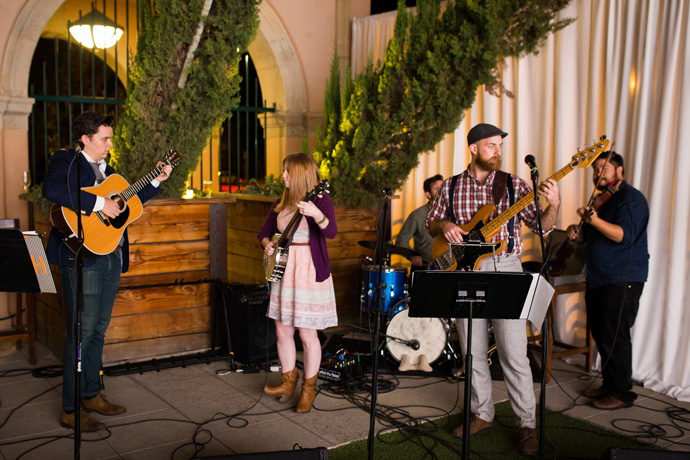 Our wedding band: The Show Ponies (check out their Youtube Channel!)

They played “La Vie en rose” for our ceremony // so happy a guest captured it on video! 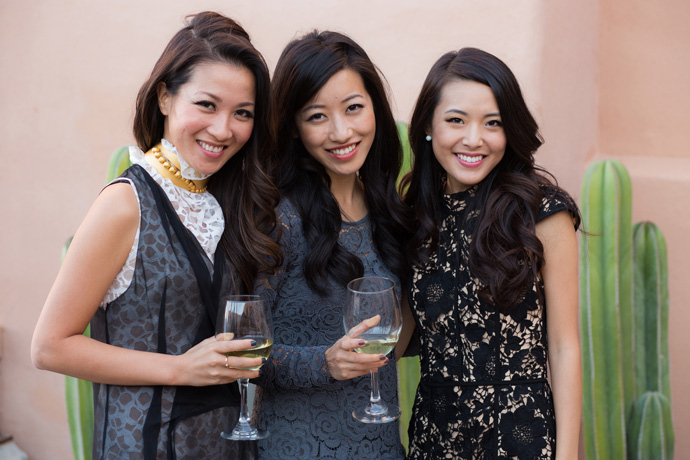 Some of you may know these wedding crashers ;) Wendy, Jean, & Jen 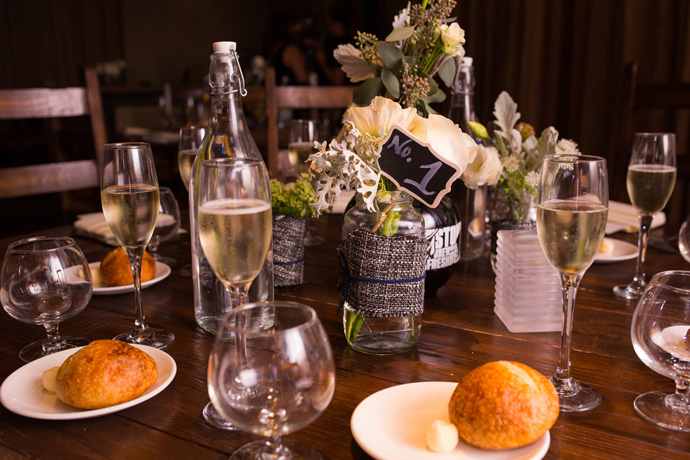 The growlers were a popular party favor 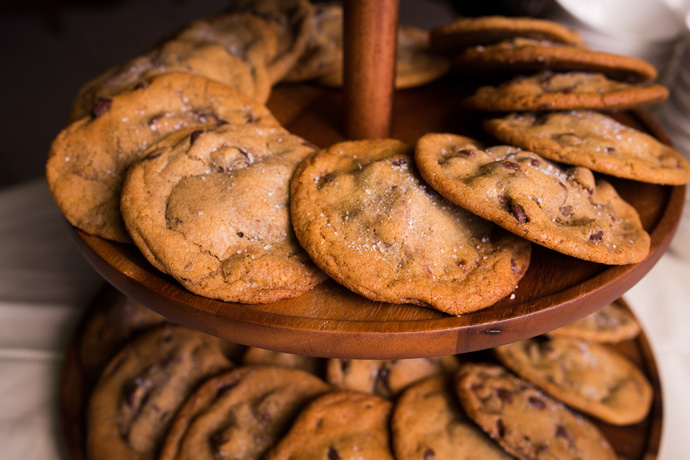 Neither of us like cake, so a friend of ours who went to pastry school agreed to bake her signature Nutella stuffed chocolate chip cookies for our dessert. They were DELICIOUS! 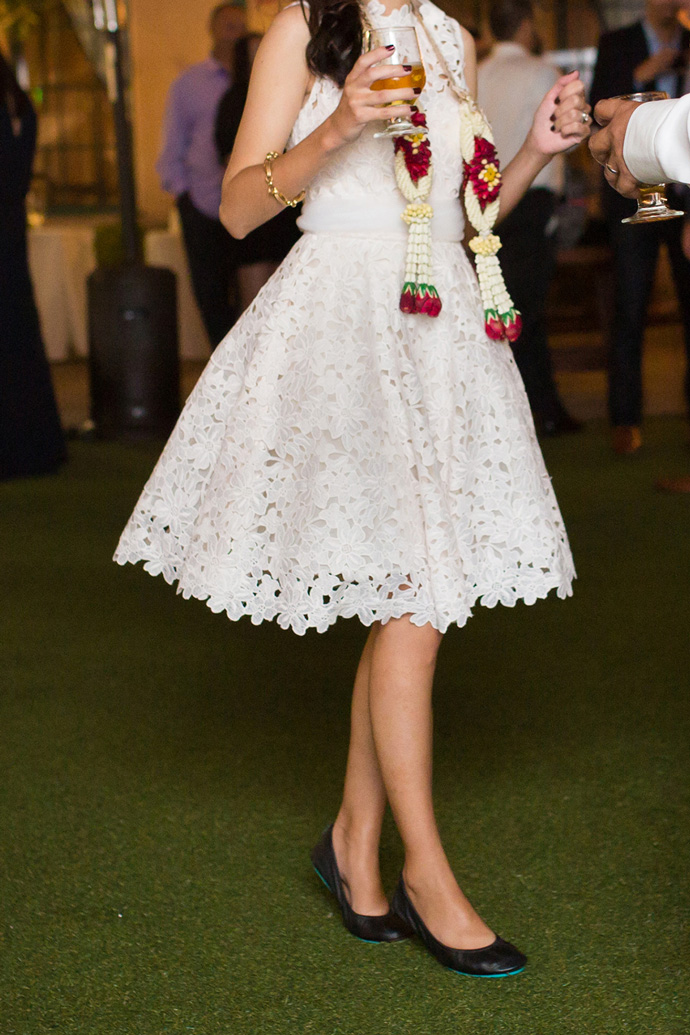 About half way through the night, I kicked off my 4″ Manolos and switched into a comfy pair of Tieks. =)

All in all, it was a pretty laid back wedding which is exactly what we wanted. I hope you enjoyed the photos, and look out for a little special treat tomorrow. =)