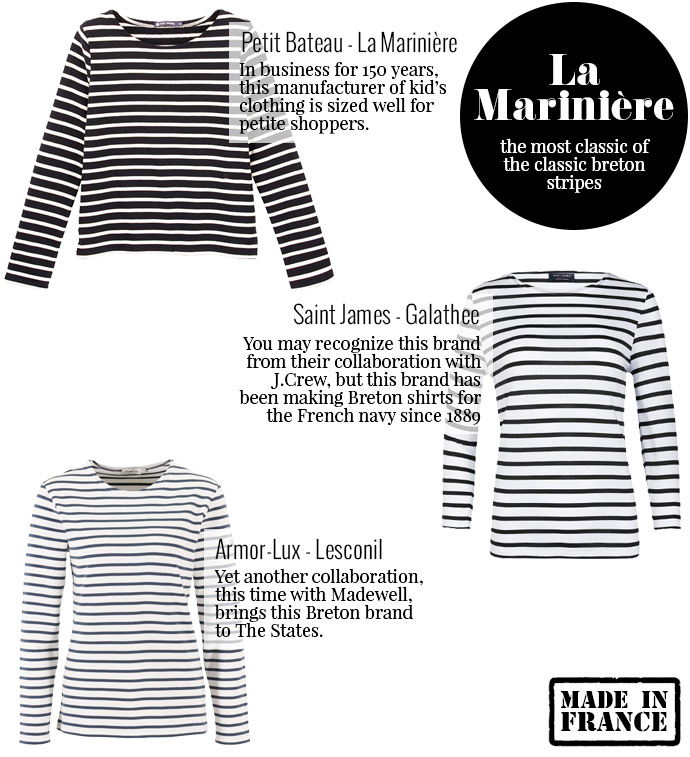 If the above image links don’t work on your device, they are also below:
PETIT BATEAU   |   SAINT JAMES   |   ARMOR-LUX

As my old stripe tees and sweaters are getting faded and misshapen, I’m toying with which pieces will be added to my wardrobe to take their place. I love upgrading wardrobe items as the old ones are on their way out, so I’ve been looking to replace old BR and H&M stripes with something with a little more heritage and je ne sais quoi.

The ones I’m exploring are some of the oldest manufacturers of the Breton shirt…Saint James (which has been the official shirt maker of the French navy), Armor-Lux (which has been manufacturing in Brittany since 1940), and Petit Bateau (in operation for 150 years), which is probably my best bet given all indications point to the sizing running small (they make children’s clothes, with the larger sizes marketed toward adults). All three of these brands still manufacture their Breton shirts in France.

And because I love fashion history so much, here are some fun facts about Breton shirts:

If you have a favorite or would suggest a brand based on sizing, I’d love to hear it!