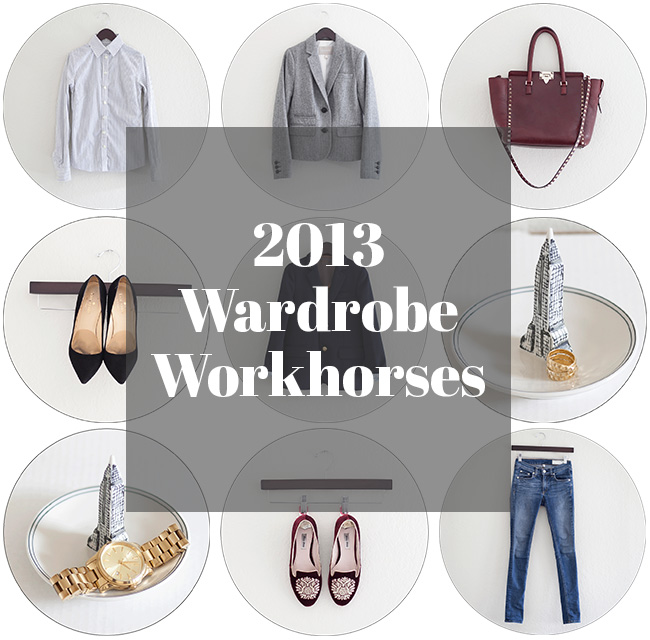 They say we only wear 20% of our wardrobe…well, here’s the upper echelon of my 20%. I call these pieces my wardrobe workhorses because while they may not have been my favorite or most special wardrobe items, they were my most grabbed for and versatile. That makes these some of the best no regrets, money well spent, and good value for the money items in my wardrobe. I hope you enjoy reading a bit more about them, and why I’ve found them so great.  =) 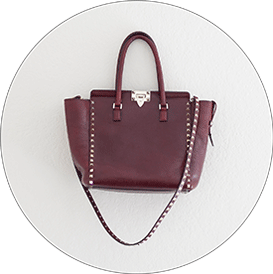 I say wardrobe-neutral because that can be different for every person. For me, burgundy works as a neutral, in that it pretty much goes with everything I wear. This bag was actually bought in July of 2012, but it’s proved it’s worth a million times over in 2013. This bag is fabulous for a few reasons. First, it’s sturdy as hell. This bag has traveled everywhere, been smooshed under plane seats, dropped, dragged, caught in the rain, caught in the snow…you name it. Second, the top zips so I feel secure in crowded or pick-pockety areas. Third, it can be held by the handle, thrown over the shoulder, or worn cross-body, which makes it very versatile. It’s also big enough that it can carry all my essentials, including my bulky DSLR, which has been essential for travel and blogging. This has been my “everyday” bag since the day I brought her home. Frankly, I’m amazed she still looks so good with all the beatings she’s taken. 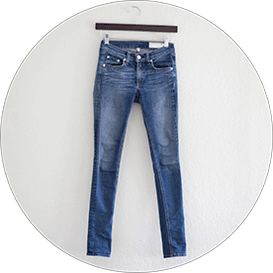 You’ll see these jeans a lot on the blog…a lot. But that’s because they’re perfect! These are the Rag & Bone Skinny Jean in Preston wash, which runs about 1 size smaller than their other washes (I wear a 24 in the Preston, and 23 in other washes). I’ve bought a few other Rag & Bone jeans since these and while they’re all great, none are as great as the Preston. These don’t bag out in the middle of the day, nor do the knees look all bunchy after sitting or walking. The wash is perfect, and the denim is substantial, but soft. After lots of washings, the inseam is just short enough that I can wear them without getting them hemmed. These are so good, I’m considering using a gift card I have to buy a second pair.

That Are Just As Cool (Cooler?) As Heels 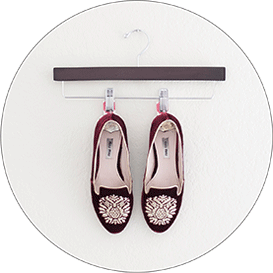 These flats are amazing. I can’t wear heels all the time, and when that’s the case, I slip on these burgundy velvet, embroidered, bejeweled beauties with the knowledge that whatever I’m giving up in terms of heel height, I’m gaining back in pure awesomeness. I’ve worn these all over LA, NYC, San Francisco, and Paris. In each city, I’ve had  ladies stop to tell me, “I love your shoes!”. And not crazy bag ladies either. Stylish French women, even! I’ve never had a pair of heels get as much love from other people as these flats.

See, the thing with flats is – and this is why I bought these in the first place – I tend to ignore them. They tend to be utilitarian and bought with a boring purpose in mind (like commuting), while I pour all my attention and discretionary shoe money into fancy pairs of high heels. But then my outfits never felt as nice with flats as they did with those fancy heels. So…my answer was “fancy flats”, and they have become one of my best purchases! 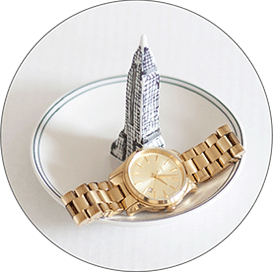 I started wearing a watch when I bought this Kate Spade, and it soon turned into an everyday affair. While I love the dark brown band on the Kate Spade, it didn’t quite go with everything I wore. I wanted a watch that acted more like jewelry, so I picked up this chunky, menswear style watch in solid gold-tone metal. My favorite thing about this watch is how the watch-face matches the band…I think it looks so sleek!

Wearing it with silver-tone bracelets helps it go with silver jewelry and hardware (like on handbags), which means I wear it pretty much everyday. I wear it so often that it’s opened up the thought that if funds were to become available, I’d like to upgrade to something fancy in the future.

A crisp, white collared shirt is included on pretty much every “must have” wardrobe list. But I’ve found a crisp striped white collared shirt even more versatile! This one has soft grey vertical stripes that adds just a touch of interest and pattern that a plain white shirt can’t do. Every time I think to layer a white dress shirt under something, I try the striped version as well and it almost always looks even better. I’ve had to make a conscious effort to wear my plain white shirt more often because the poor thing never got worn. I’m searching for the perfect silk version as well.

Oh yeah, and I love, love, love the Banana Republic Non-Iron shirts. I’ve amassed quite the collection, of which this is one. 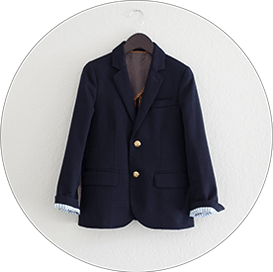 Better than a little black blazer, has been a little navy blazer. Black blazers can feel too stuffy for casual occasions, which makes this navy shrunken blazer oft-reached for. The gold buttons and striped lining give off prep-school vibes, or when paired with vertical stripes, nautical. With a slew of “schoolboy” blazers on the market today, mine is actually a boy’s blazer from the J.Crew Crewcuts line, which I recently had slimmed for a less boxy fit. This blazer has been well worn since I picked it up in 2012, but a newcomer is slowly moving in on her turf. This double-breasted version just may make this list for 2014.

In An On-Trend Style 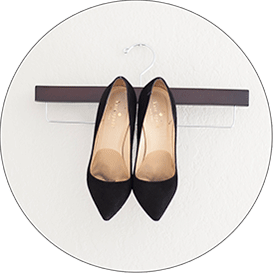 Black pumps are a wardrobe staple, and while I have a few pairs, I felt I was still lacking something in the black shoe department. Point-toe pumps have come back with a vengeance, and my little round-toe and almond-toe pumps just stopped looking right. I needed something more on-trend. So I picked up this pair of Kate Spade black suede point-toe pumps and they have been practically fused to my feet ever since. They are black so they go with everything. They are on-trend so they look right with everything. Bonus points: they are one of my comfiest pairs of heels. 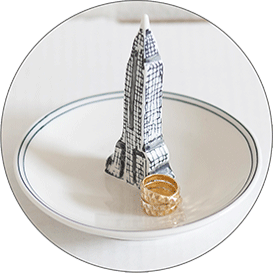 When I went about purchasing this ring, I was thinking about something that felt like “me” that I could wear every day. I don’t switch my jewelry up too often, and I love the idea of having signature pieces that I can wear all the time. I was also looking for something of better quality that I could wear without having to worry about it changing colors or turning my skin green. This particular piece is vermeil (sterling silver plated with 18K gold), so it’s not precious (meaning, I can beat it up without feeling bad), but it’s not cheap materials either. It’s stood up incredibly well over time, with only a slight rubbing of the gold-plate. It’s what I reach for when my hands feel naked, but I don’t want to wear anything flashy. Just a great little everyday piece. 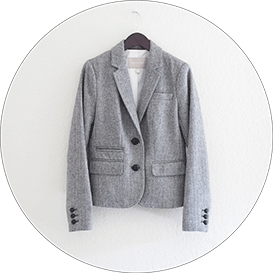 A latecomer to the wardrobe, this blazer has proved itself so versatile, it scored a place in my suitcase to Paris. The heavy wool texture and small herringbone pattern is mere elbow patches away from college professor-chic. The black buttons make it more versatile with jewelry color choices than it’s navy schoolboy sister.