Forever on the blazer hunt, I’ve returned to looking for a good fit in schoolboy-esque styles for fall. The curse of a narrow shoulder has put me in the predicament of having to tailor many of my women’s blazers in the shoulder, which isn’t the best course of action if you can help it. Thus, I’ve ventured into the world of boys blazers looking for a better fit in the shoulder, and maybe even some details which aren’t available in many women’s options.

Always haunted by the J.Crew women’s Schoolboy Blazer, I had to try it just one more time. I believe this makes the fourth time I’ve ordered this blazer, and just like every time before, it’s not a very good fit for me. Below is size 00P: 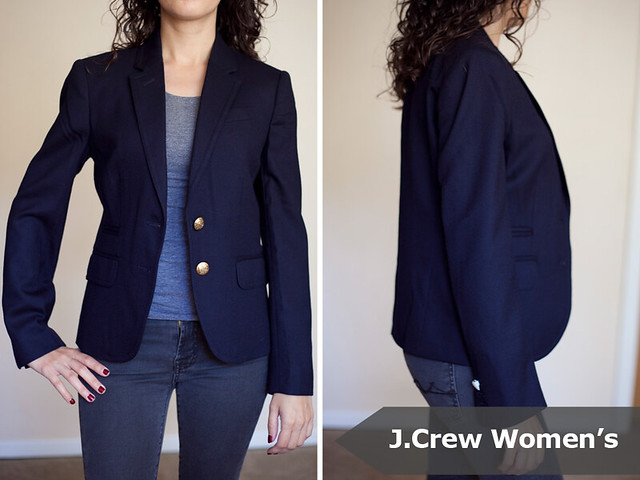 On me, this blazer would need the shoulder taken in, the torso slimmed, and the sleeves slimmed…not very exciting prospects. I do appreciate the outside, as well as inside pockets, extras that not many women’s blazers have, which is I think a heavy factor in why I keep coming back to look at this blazer. 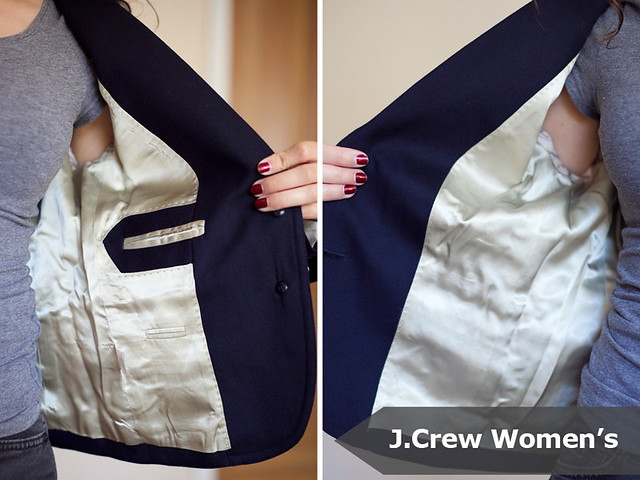 However, as I noted in this post, women’s blazers do not have the pocket room that mens or boys blazers have. Women’s blazer pockets usually aren’t very wide nor very deep, so it’s much more difficult to stuff them full of junk like I’d like to.

So I turned to boys blazer, mostly looking for a smaller fit in the shoulder. After some research, it seems when any media suggests a boys blazer for women, it’s the Brooks Brothers two-button blazer. I’ve seen it everywhere from Lucky Magazine to Marie Claire to Ellen’s back to even the current September issue of InStyle. I ordered two sizes to try, the best of which is shown below: 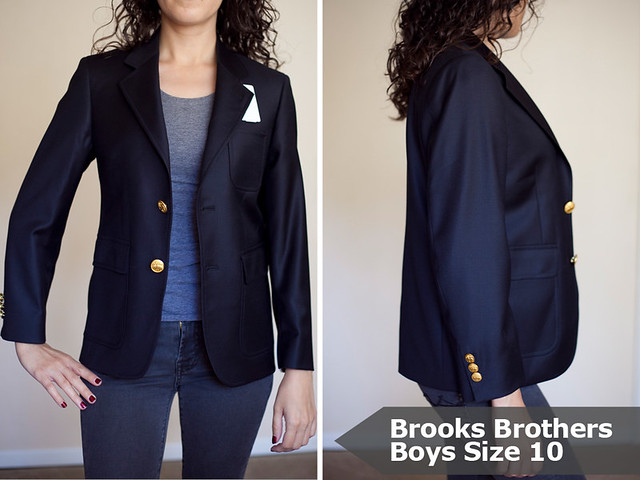 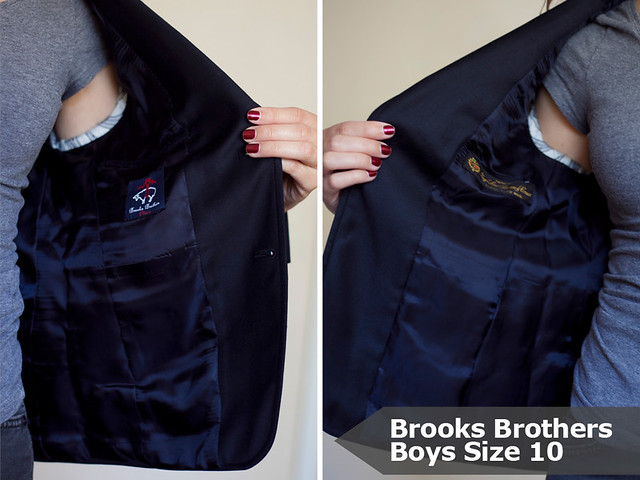 This blazer is a much heavier weight than most women’s blazers I’ve worn, and the sheen is very indicative of a dressy men’s blazer fabric. I was surprised to find a thick padding in the chest, (I assume to keep it’s shape) and nice deep pockets that will hold anything from sunglasses to my beloved pocket squares easily.

I wish there were more inside pockets, as there was only one (above the Brooks Brothers sheep logo), and I wish the outside pockets were besom, since I’m not a big fan of patch pockets. I would size down for a better shoulder fit, but haven’t gotten around to ordering it yet.

Alterations it would need: slimming and shaping of the torso, slimming of the sleeves.

The next attempt was J.Crew Crewcuts in several sizes: 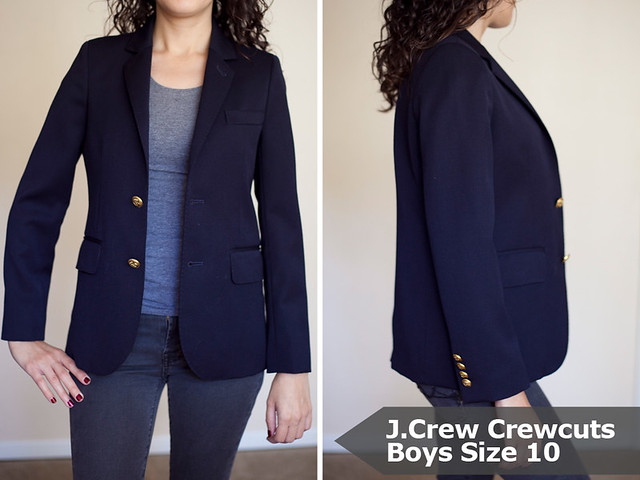 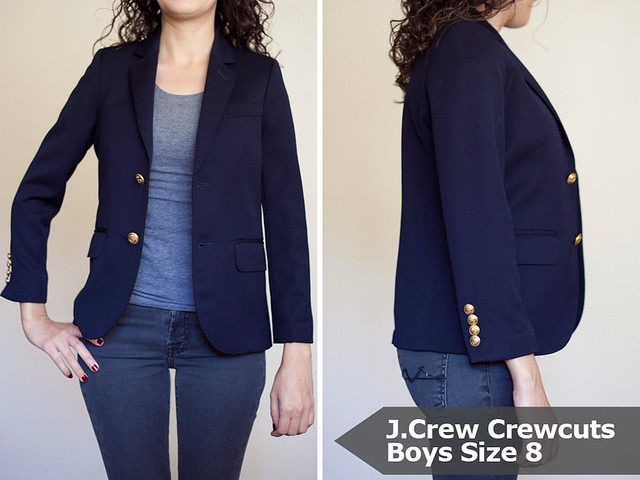 Size 10: has a better fit for me in the shoulder than the women’s blazer, a nice sleeve length (just enough for the cuff of a long sleeve shirt to peek out), but a bit long in overall length.

Alterations it would need: slimming/shaping of the torso, slimming of the sleeves.

Size 8: has a much more “shrunken” fit and is more flattering on me in terms of the shoulder and overall length. The sleeves have now gotten short, which is fine if you’re going for a “shrunken” fit, but some people may not like (a little fold of the cuff and pushing up of the sleeves looks pretty cute). The sleeves are also much slimmer, which means they may not need slimming, saving on alteration costs.

Alterations it would need: slimming/shaping of the torso. Maybe a little sleeve slimming.

I much prefer the pockets on the J.Crew Crewcuts blazer over the Brooks Brothers blazer, including the plethora of inside pockets: 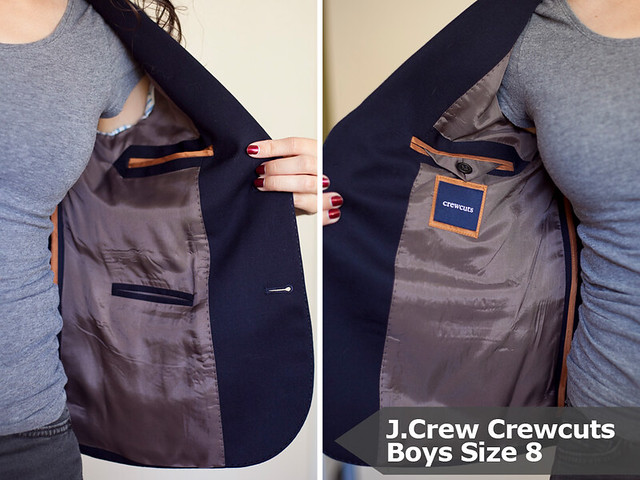 Boxy fit – expect boys blazers to fit boxy in the torso, which is very different from women’s blazers which usually have at least a small bit of waist-showing shape. Some women like a boxy fit for a “boyfriend” look, but if you want some shape brought to the torso, expect to have to tailor it.

Shorter sleeve length relative to overall length – the sleeves are much shorter than a women’s blazer of similar length and size.

More padded construction – both brands of boys blazers I tried had noticeably more padding in the chest than women’s blazers. This may feel uncomfortable when buttoned for anyone with a busty figure.

Bigger and deeper pockets – if you like to stuff things in your clothing pockets, this will probably come as a welcomed feature.

So, I thought I had made my decision on which blazer to keep, but after putting together this post and examining the photos, I’ve become very indecisive. I’d be curious to hear what you ladies think about these blazers and which you would keep if you were to keep one. =)