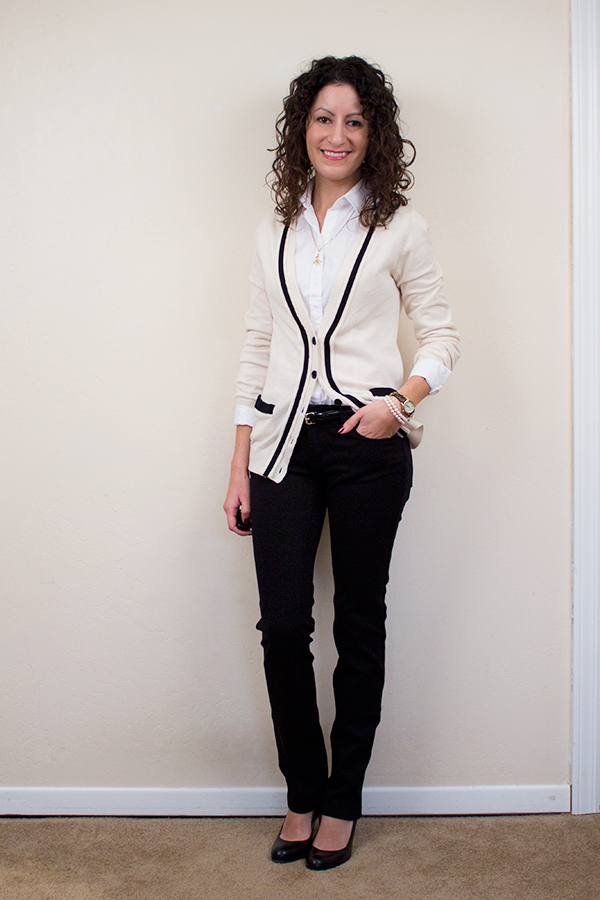 The name Coco Chanel is usually tied to tweed jackets and quilted handbags, but to me, she’s my favorite tomboy. When I pulled this cardigan out from under a pile at the Banana Republic Factory store, my first thought was, “it’s so Coco!”

This cardigan has a menswear feel to it with it’s length, slouch, pockets, and contrast details. Black and white (and cream in this case) is a palette that Coco famously wore often. I felt like this was a piece she would have worn casually around her atelier, so my first attempt at putting together an outfit around it became one that I imagined Coco might have worn. 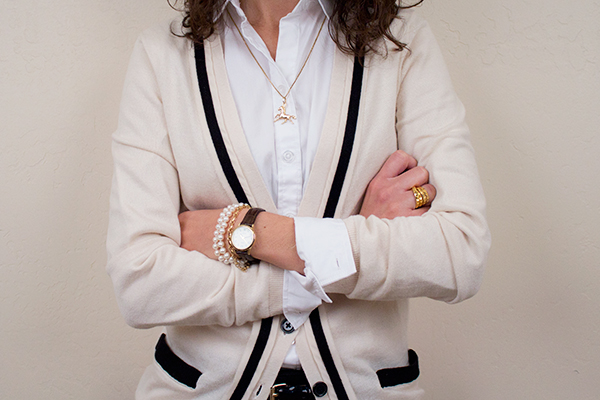 A crisp button-down and black slim pants keep the palette black and white. Pearl bracelets are a nod to Coco’s favorite jewelry choice, and a menswear-style watch tomboys it up. The horse necklace is something my dad wore during my childhood, and recently passed down to me. I thought it appropriate since Coco was very involved with horse racing during her lifetime. Even the Loubies can be tied to Coco. Did you know Christian Louboutin freelanced for Chanel before he was a famous shoe designer? In fact, the Louboutin red soles were inspired by Chanel red nail polish.

In 1992, I incorporated the red sole into the design of my shoes. This happened by accident as I felt that the shoes lacked energy, so I applied red nail polish to the sole of a shoe. This was such a success that it became a permanent fixture.

If you’re interested in the cardigan, it’s not perfectly fitted on me, but the slouch works for the menswear look of it. It’s a very thin cotton/rayon blend, so it’s good as a layering piece, but won’t keep you toasty on it’s own this winter. It’s a very loose weave, so it may shrink up quite a bit in the wash if anyone were interested in toasting it in the dryer. The trim around the black contrast panel along the button placket is gauzy, so it looks almost as if it could be silk, which is a nice touch that ups the style quotient on this piece.  I haven’t washed it yet, so I’m not sure how it will behave in the laundry.

And if you would like to read about the life of Coco Chanel, my favorite biography of her is Chanel: A Woman of Her Own by Axel Madsen (I’d love any other book recommendations on the subject as well!). Despite some of the choices she made (her activities during WWII are questionable), I am in awe of how strong of a character she was to challenge the norms of her time.  As a young woman, Coco shocked people by wearing trousers and riding horses like a man, designed women’s fashions out of jersey (a fabric that was only used for menswear), and wore the clothing of coastal fishermen (the mariner stripes that today are synonymous with chic french women).

Some photos of Coco, the original tomboy: 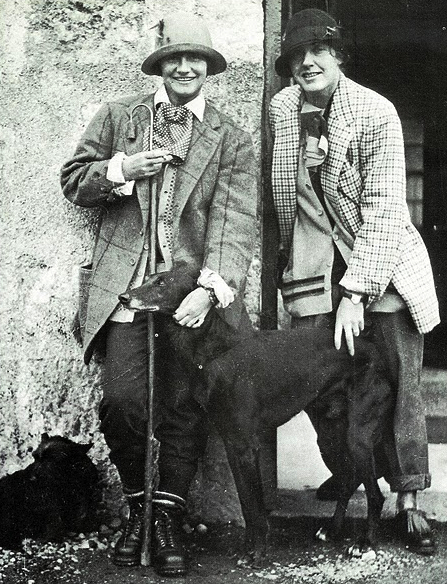 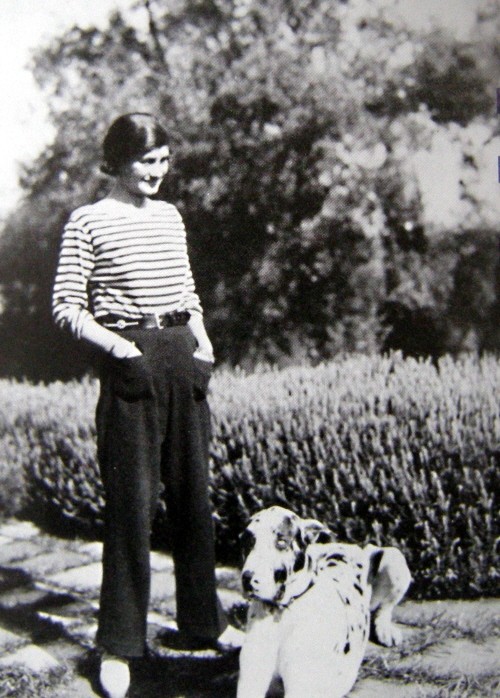 Has anyone else picked up this cardigan? How are you styling it?