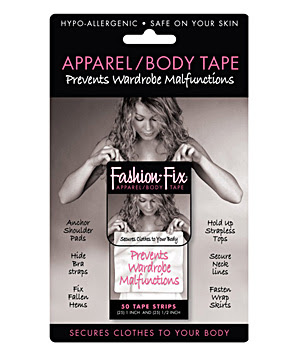 Fashion tape is basically double-sided tape that is safe for skin and fabrics, and is used to keep garments where you want them. An offshoot of toupee tape, it has been used by stylists on photo shoots and celebrity red carpets for years. I’ve seen fashion tape mentioned as a useful product several times, and picked up a box at a beauty supply store. It’s been a staple in my handbag ever since.

I use it primarily to keep necklines in place, but I’ve also used it to keep cardigans perfectly draped, and it even kept a co-worker’s over-the-knee boots up during a very crucial after-work happy hour. It won’t work for everything, as it sticks better to some fabrics than others, but I’ve found it very useful in making garments more wearable.

There are lots of uses for petite women. Tack a neckline that comes down a little low so it doesn’t slip and expose anything. If you wear a lot of wrap tops and dresses like I do, tape the neckline down so nothing opens accidentally. Tack up extra length on a pair of trousers or skirt (probably not strong enough to hold jeans folded under, but will work on thinner material well enough) that you haven’t hemmed yet, or just don’t want to spend the money on.  Tape extra length of a belt down so it doesn’t flap around. These are just some of the uses I’ve found for it, and I’m sure there are a ton more.

I’ve been buying Hollywood Tape and have been very happy with it (I snip a few strips in halves and quarters for smaller jobs, and one tin lasts a long time). Another popular brand is Braza. They are especially handy if they come in a “purse pack”, because then they’re always on hand if something goes awry.

Anyone else use fashion tape? Any other uses I didn’t mention?