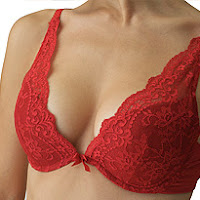 A big “thank you” to all the ladies who entered The Little Bra Company giveaway! Reading all the entries was so much fun! There were 25 entries, which was even more than I expected. You ladies are awesome!
It was so hard to choose just one…so without further ado…the winner of The Little Bra Company giveaway is…Esther, with the winning term of endearment…”Mussi“.
Her explanation: “My Significant Other calls me Mussi, short for Mussolini, the Italian fascist dictator because I’m short and petite and small but outsized in character and imperiousness! :)“
Congrats Esther! Your red Lucia set will be on it’s way!
A big “thank you” also to Emily of The Little Bra Company for kindly offering the giveaway!
To read some of my other favorite entries, click “Continue Reading…” below.

There were so many good entries! I’d like to share some of my other favorites with everyone:

Jackpot! – One time my husband-then-boyfriend was quite seriously explaining to me how I had really hit the jackpot by hooking an awesome guy like him.  We were standing next to each other, so I swiftly reached over, poked his cute-but-not-quite 6-pack stomach and asked “Is this where the jackpot is??” with an innocent look.  Its become our favorite joke to give each other a hard time…its even engraved on our wedding rings :)


Cuppy – I gave my boyfriend the nickname “Cuppy” because I can easily cup his cute butt with my one hand.  I know, it’s weird and some people don’t get it, but I like that it’s a really cute and funny nickname for him.  It also makes us smile and that’s the best part.

Mon petite chou chou – While living in Denmark, I dated a very tall French guy who used to call me “mon petite chou chou.”  I spoke Danish, not French, and always thought it meant “my little sweetheart” or “my tiny sweet one.”  It wasn’t until years later that I found out the actual translation is “my little cabbage!”


Truckie – My boyfriend snores really loud, makes as much noise as a running truck engine, so I decided to name him Truckie— there are some variations; sweet, silly, cute Truckie, and so on….


Ma Cocotte – Before we met my husband had lived for two years on the South Pacific French Territory island named New Caledonia. He, therefore, speaks fluent French. When we were dating, my boyfriend (now my husband) wrote a sweet letter addressed to “Ma Cocotte” which means “My coconut”. So cute!

Thank you again to everyone who participated!