It’s amazing how large a role body proportions have in making some people look taller or shorter than they really are. Case in point…here’s a little story:

In college, I became friends with a fellow petite. We were roughly the same height and weight, and quickly bonded over our experiences being so tiny.

Because I was a tiny bit shorter than her, I always assumed when people saw us together, I was the one that looked the smallest. However, I was always shocked to hear other people comment on how tiny she was. It didn’t make sense, I was the smaller one, and I wanted recognition for how awesomely petite I was! What was happening?

I think the reason lies in the differences between our body proportions.

As I’ve mentioned before in past postings…I have a short torso body type. What this means is, in comparison to the rest of my body, my torso is short, and my legs are long. This also seems to dictate the way body fat is distributed across the body. Because I have long legs and long arms compared to the rest of me, the body fat in those areas have more room to spread out…so they appear thin. However, because my torso is short, the body fat in that region has fewer places to go, so I’m a little thick around the waist.

My petite friend, on the other hand, has a long torso body type. This means she has a long torso compared to the rest of her body, and her legs are short. This also affects her body fat distribution, as her legs and arms are thicker than mine, but her waist is slimmer.

Now…from what I can gather, my long legged, short torso body type is the reason I don’t look as short as I really am, and why my short legged, long torso friend looks shorter than she really is. Take a look at the illustration below and see if out of the 3 figures, one stands out as taller, and one stands out as shorter: 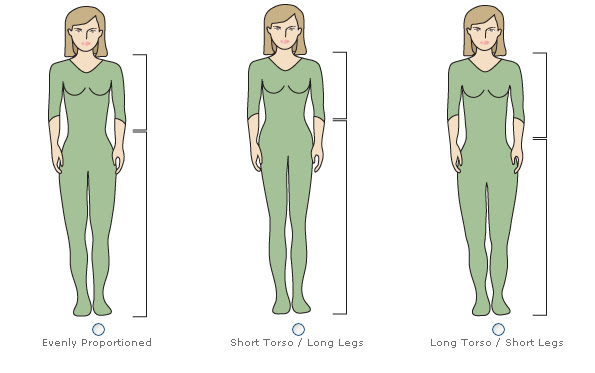 It’s a little hard to tell, but even though each figure is the same height, the short torso/long legs figure looks slightly taller, followed by the evenly proportioned figure, with the long torso/short legs figure looking the shortest.

Ah ha! So this is why people never gave me credit for being the shortest! My body proportions are deceiving!

Has anyone else had experience with this phenomenon? Does your body type make you look taller or shorter than you are?